TOP 5 REASONS WHY YOU SHOULD VISIT AMBOSELI NATIONAL PARK

If you've been wondering whether to visit Amboseli National Park, here's is the top 5 reasons why you should Visit the park. READ MORE:

Nestled on the southern part of Kenya bordering Tanzania, Amboseli National park ranks as one of the most popular world class parks in the country. The name Amboseli was derived from the Maasai language and it means ‘salty dust’. The park is considered as one of the best safari destinations for game watchers thanks to its large population of diverse wildlife, open vast savannah grasslands and the signature large herds of its large-tusked elephant population. Moreover, its also best known for its wetlands, the Enkongo Narok and Olokenya swamps that always attracts numerous animals making it a perfect spot for, among other activities in the park, Game watching. While much of the hype about wildlife and safari has always been limited to the now Hollywood famous Hells Gate and the Maasai Mara reserve, thanks to their respective roles in popular Hollywood and Disney movie productions, little attention has always been paid to some of the other iconic parks in the country such as Amboseli and like the 21st generation persons would put it, people have actually been ‘sleeping’ on it. In this blog, I am going to explain to you 5 reasons why you should visit the park, and in case you’re among the lot that has been guilty of actually ‘sleeping on it’ may this post ‘wake you up’ and get you planning for that ultimate Kenyan wildlife safari to one of the best parks in the country, Amboseli. 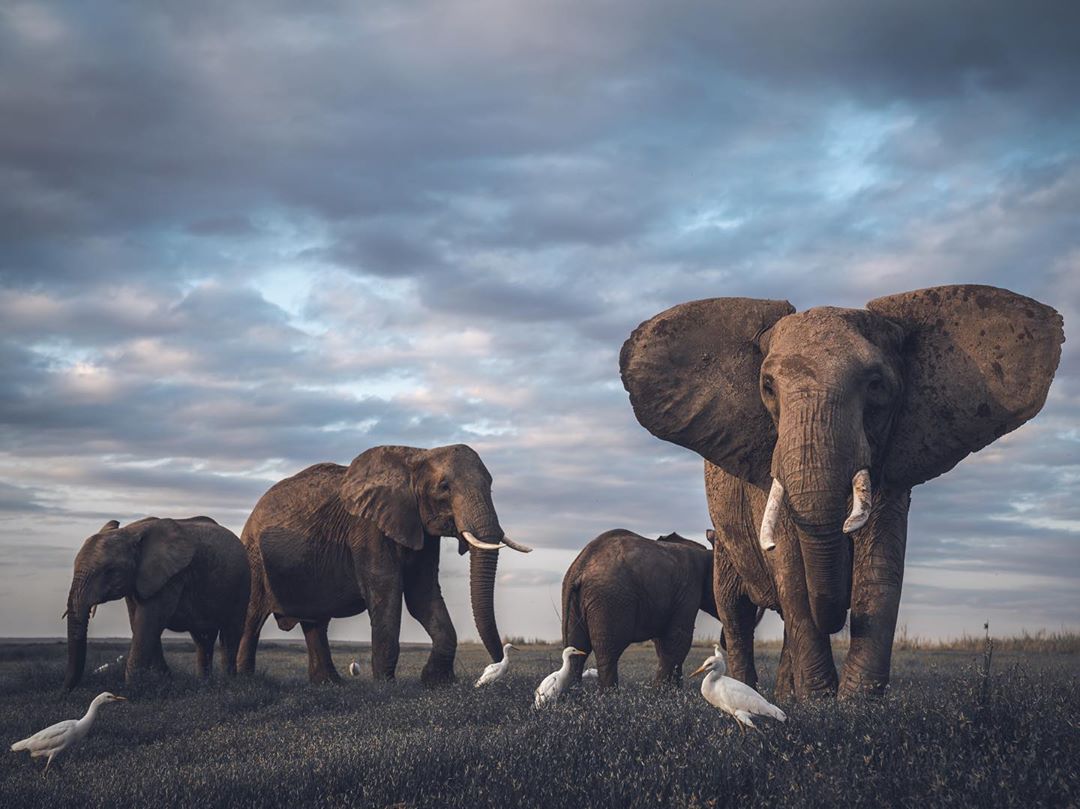 Amboseli National park is undoubtedly best known for its large herds of free roaming elephants and if you’re a sucker for watching the big game, the park is an ideal destination for you as there are over 1000 elephants in the park. Moreover, if you lucky you’ll get to see the Big Craig, famous for its large tusks. 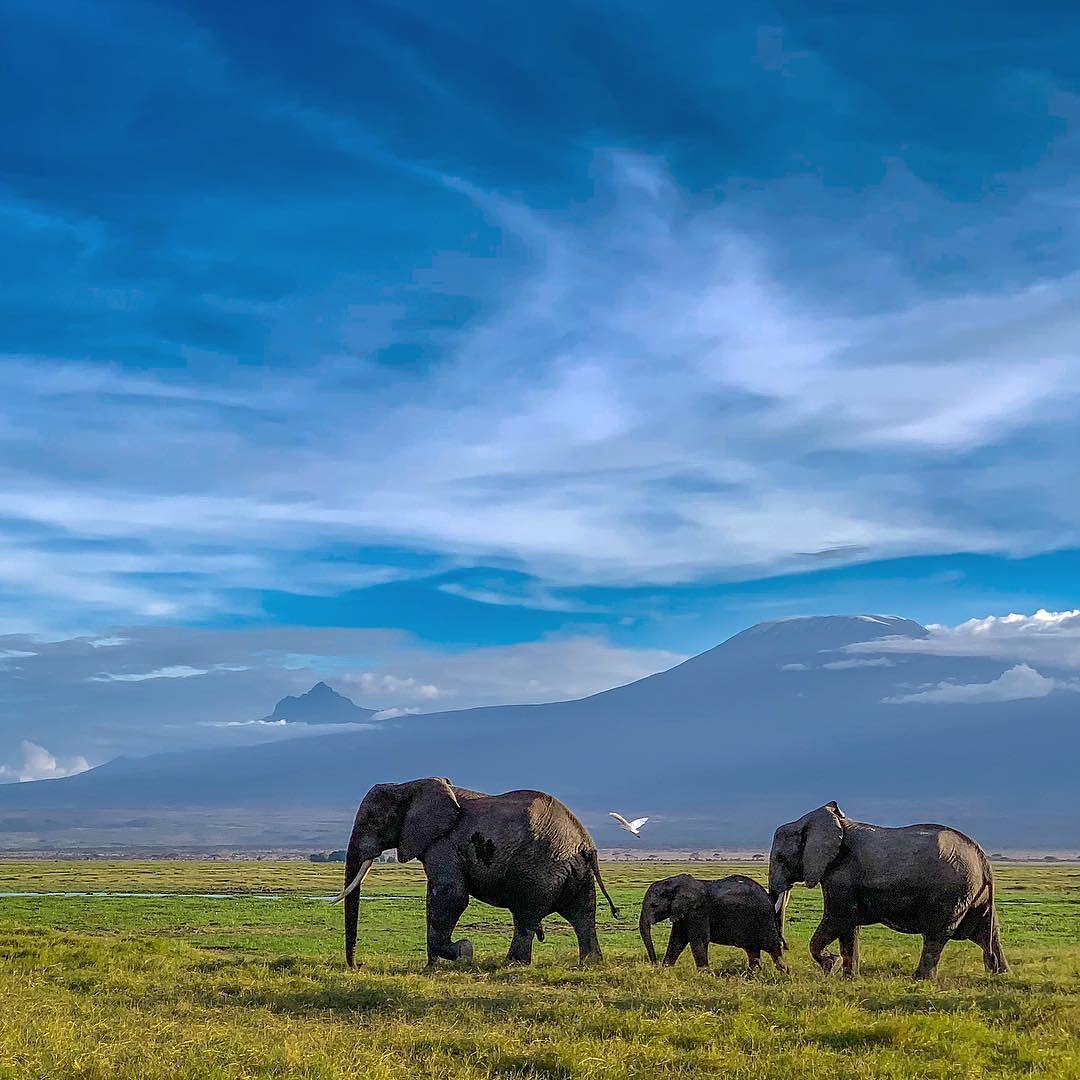 Set up against the backdrop of Africa’s tallest Mountain, with vast open savannah fields and wetlands on the foreground. The park offers one of the most scenic views of the Mountain, and with regular sighting of the large tusked -Jumbos, the park offers a picturesque moment that an only rival El Greco’s view of Toledo paintings. The classic sighting of a herd of elephants freely roaming against the backdrop of a snow peaked African mountain will perhaps stick on your head like a childhood song. Moreover, you can explore Lake Amboseli – a seasonal lake which always floods during the rainfall season. It’s an open guess that by now you have seen a Lion mostly freely roaming in the park or in other instances a cage, but have you seen a lion climbing a tree? Perhaps, to bask in his glory as the king of the jungle? If not, you definitely need to visit Amboseli. While cases of lions climbing trees are rare world over, in Amboseli you’ll definitely get to see the un common. While Amboseli is prominently known for its large-tusked elephants. There are also other wildlife species such as the giraffes, lions and the wildebeests and even cheetahs which adds to its diversity of flora and fauna. Therefore, planning to immerse yourself in a sea of wildlife diversity is perhaps one of the best you can make.

Amboseli National park is located only 230 kilometers south of the Capital, Nairobi. Not only is it strategically located next to Africa’s tallest and snowcapped Mountain, but also next to a group of surrounding ranches that make up the Amboseli ecosystem. Moreover, its location is mostly ideal for combining trip circuits to either Tsavo or to the Tanzanian side made up Serengeti, Tarangire and Ngorongoro crater attractions.

PART 3: BEING A TRAVEL CONSULTANT: FIRST TIME AS A DRIVER GUIDE - I GOT LOST IN THE MARA FOR 7 HOURS WITHOUT GUESTS KNOWING. (Cont'd)

PART 2: BEING A TRAVEL CONSULTANT: FIRST TIME AS A DRIVER GUIDE - I GOT LOST IN THE MARA FOR 7 HOURS WITHOUT GUESTS KNOWING. (Cont'd)

PART 1: BEING A TRAVEL CONSULTANT: FIRST TIME AS A DRIVER GUIDE - I GOT LOST IN THE MARA FOR 7 HOURS WITHOUT GUESTS KNOWING.